Yesterday ( Thursday 8th October) I visited the Great British Beer Festival again, having been every year since 2005 ! This year, it was held again in Olympia. I always meet up with the same crowd every year. This time it was different as Mrs Ken wanted to come, to keep an eye on me. 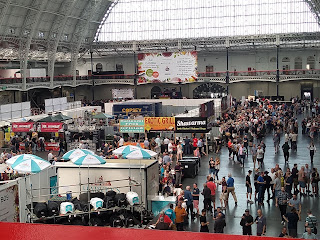 We arrived about 20 minutes before opening and slowly snaked our way into the building. Security was tight, our bags were searched. Mine was full of CAMRA magazine, Mrs Kens full of food.

"Having a picnic are we ?" said the steward. Outside there was a guy in a hi viz jacket , with a sniffer dog, also wearing a hi viz jacket, with the word explosives on it !

According to publicity gumph there were over 1000 beers, ciders and perrys in the vast hall. As friends arrived and sensing some confusion over glasses, I put an elastice band round mine, which proved useful later.

Keen to spot our local brewers beers ( Maxim) who had sent down Double Maxim and Raspberry Porter. The bar for these was nearby so sauntered over to find the latter had sold out the day before. ie. at the end of day one for the general public, which I consider amazing ! 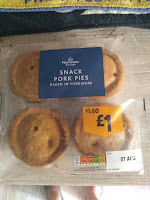 There were a lot of food-stalls selling everything from pasties to seafood to pickled eggs. As these are normally pricey, I always take my own and its been a running a joke over the years that I turn up with some discount out of date pies. These had a date of 7th August. Not too bad but there is no year printed ! 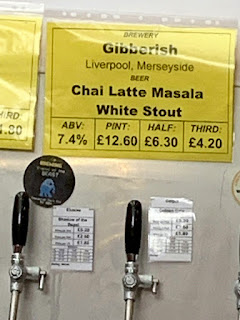 Most of the beer pricing was what you would expect for London, but one beer stunned me. CAMRA had set up a large key keg bar with over 50 beers. Looking at the programme, Chai Latte Masala White Stout at 7.4% looked interesting in the programme, till I walked up the bar and saw the price ...£12.60 a pint. WTF? That is taking the piss. In fact one brave soul at our table actually tried some, and confirmed it tasted like it as well ! 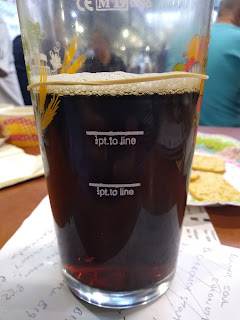 Back to the beer glass, each glass has a third pint, a half and a full pint marker. As an experiment I moved my elastic band up above between the half and full pint lines to see what would happen. Well nothing till the last drink ( see picture). Not applicable to GBBF but how many times do we get a short measure plonked down in front of you, and having to ask for a top up . Victory for the common man.

It was great catching up with old friends, and making new ones. All to soon it was time to leave to get tube back to Kings Cross. Boarding the train back to the North East , we found our reserved seats were occupied ; there were 2 women sitting in them . They were in the wrong coach ! On the table was one of those metal/wicker  animal things about 2 feet high sitting on its back legs with its head and ears up. As they got up to move I said.

."And dont forget to take your kangaroo with you !!"
"Its not a kangaroo, its a rabbit!"
Of course Mrs Ken took their side and said it was cute! As they scuttled off I said " Still looks like a kangaroo !"

Already looking forward to next year.
Posted by Kenp at 19:09

My name is Ken and I am a lover of real ale. I live in the North East of England and am an active local CAMRA member.

I can’t remember when I was first attracted to real ale, but do remember my first beer; two halves of Youngers Tartan, in a dimpled glass, in 1968. (Yes I was just underage). I vaguely recall stopping after the two, “as my lips and mouth felt numb”, so headed off home to watch Match of the Day !.

This blog discusses beer, pubs, breweries, pub crawls, festivals and publications – in fact anything to do with beer. It’s meant to be informative and hopefully entertaining.

If you wish to reproduce any content, please ask permission first. While I welcome comments, I reserve the right to delete any that are offensive.